View the video by clicking on the image.

Interaction of Light With Plumes

When light encounters a plume, the plume scatters, absorbs, or transmits (passes through) the light. How the plume interacts with light is determined by the particulate’s shape, color, and size and the direction and intensity of the light.

When the particulate matter is LARGER than the wavelengths of light, the light is reflected or refracted:

When particles are SMALLER than the waves of light, the light is scattered according to these principles:

The forward scattering of light is the principle that dicates the sun be behind the observier's back. Sunlight will scatter forward enhancing/exaggerating an emission so that it is overstated.

An everyday example of forward light scattering: If you are driving into the sunset, you can see every spec of dirt on the windshield. When you turn and the sun is no longer in front of you, the specs are no longer seen.

In visible emissions observations, opacity is expressed as the percentage of the background obscured by the plume. The background light through the plume is used to quantify opacity.

When reading white smoke or light-colored emissions, much of the light is reflected off the plume or refracted within the plume itself. This results in a plume that is highly luminous.

Black smoke or dark-colored emissions absorb most of the light. The resulting minimal or absence of light makes these plumes less luminous.

It is important to not confuse the visibility of the plume with the visibility of the background. For instance, a white smoke plume with 25% opacity will be more visible to the human eye than a black smoke plume with 25% opacity. The obscuring power between each plume is the same. As an example, a window screen is made out of black wire. It is easy to see through, i.e., you can see the objects outside easily. That same screen made with white wire, even though it is blocking the same amount of light, would be more difficult to see through.

The Importance of the Background in Opacity Readings

In visible emissions observations, opacity is expressed as the percentage of the background obscured by the plume. The background light through the plume is used to quantify opacity.

It is desirable to have a high contrasting background for visual comparison. The observer should attempt to position themselves so that the background is in high contrast to the plume.

Consider the visible spectrum of color: 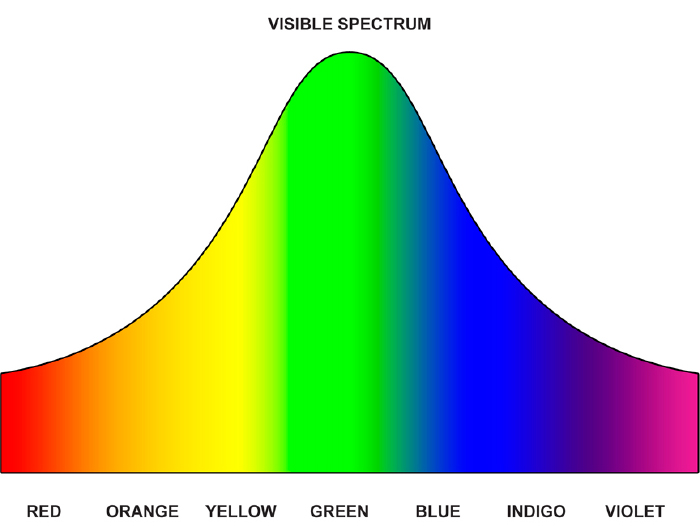 It is best to avoid backgrounds or lighting conditions in which low frequency light (i.e., reds, violets - near sunset and sunrise) is produced. These can result in a negative bias in your observation.