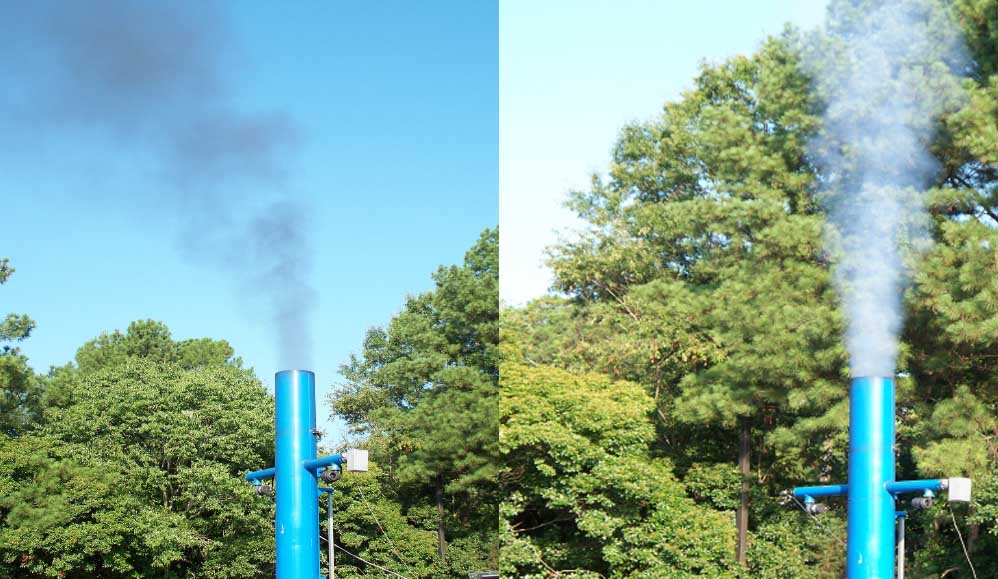 Visible emissions occur in many color shades depending on the particles that make up the smoke. For opacity reading purposes, there are two categories of smoke: black and white. Black smoke absorbs light, white smoke refracts (scatters) and reflects light.

During a smoke school field certification, students read 25 white plumes and 25 black plumes that are created by a smoke generator.

It is important to choose a background for the reading that has a high contrast to the plume, in both luminousity (brightness) and color contrast. In the images provided:

NOTE: Water vapor plumes are not considered emissions and should be excluded from observation data when performing a reading. Usually they appear very white and billowy transitioning to thin and wispy at the point of dissipation. This will be discussed further in upcoming sections.

The right background behind the plume you are observing is an important element in performing an accurate visible emissions observation. The most important part of selecting a background for an opacity reading is to ensure there is a high contrast between the plume and the background. We previously discussed the best background for white smoke is green foilage, for black smoke, a blue sky.

There are two elements that need to be accounted for in opacity readings: luminosity (brightness) and color contrast.

An example of high luminous contrast is a black plume against a light sky. Two objects of the same color could show up against each other because of differences in lighting levels or light direction.

The accuracy of opacity readings is defined by the bias of a reading:

Positive bias means that the opacity reading is higher than the actual opacity. A positive bias is typically caused by a high-contrast between the plume and background. On sunny days, when luminosity is high, a positive bias is more likely to occur.

« Properties of Light Sun and Observer Positions for Method 9 »