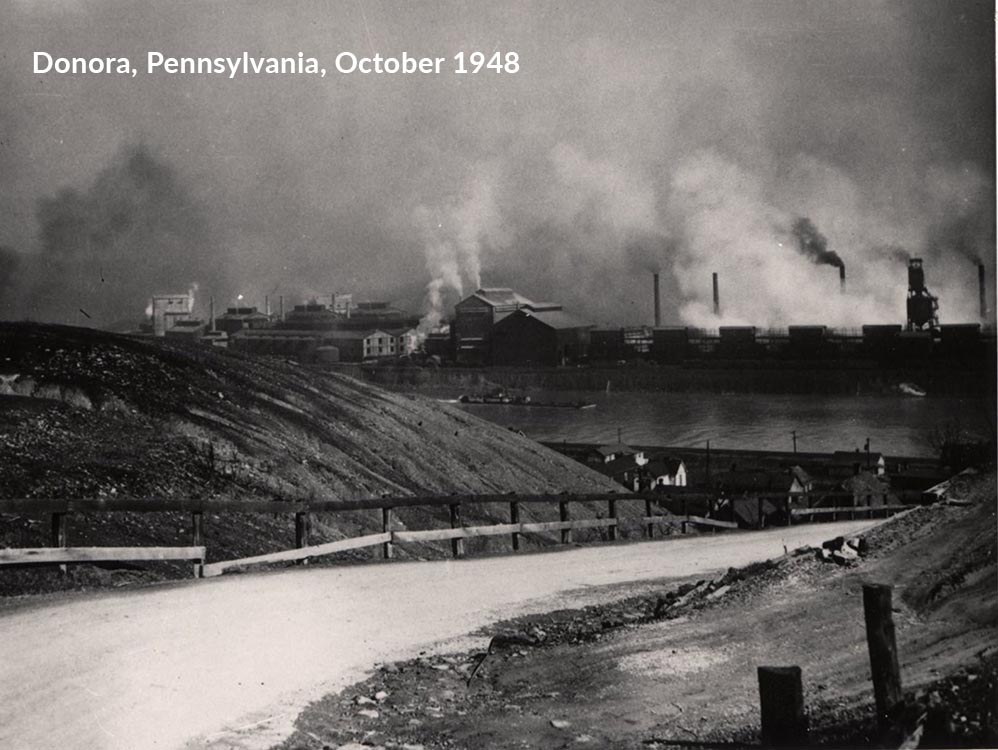 Los Angeles already had a history of air pollution. In 1903, smog was so thick that residents thought it was an eclipse of the sun. In 1943, the city suffered a "gas attack" where the smoke and fumes covered downtown and cut visibility to three blocks. This phenomenon was almost unbearable to residents; it produced stinging eyes and severe sore throats.

The City of Los Angeles developed the equivalent opacity concept that extended smoke density measurements to white smoke. Equivalent opacity was associated to the Ringelmann scale in terms of how much obscuring power the black or white plume had.

In 1945, the council began debating how to address the air pollution. In 1946, the Los Angeles Times hired an air pollution expert to evaluate the problem who developed 23 recommendations to reduce the pollution.

The Los Angeles Air Pollution Control Board developed the equivalent opacity concept. It extended the current smoke density/percent blackness measurements to all other colors of smoke. The equivalent opacity scale is associated with the Ringelmann scale in terms of how much the background is obscured.

On October 27, 1948, a yellow fog enveloped the city of Donora and a nearby village, Webster. The Donora smog was caused by an air inversion, lasted four days, and was the worst air pollution event in U.S. history. The smog resulted in 20 deaths and 7,000 illnesses. The Donora smog is considered the catalyst for clean air programs in the United States. Following the deadly Donora smog, a congressional investigation was instituted and President Truman convened the first national air pollution conference in 1950.

The Great Smog of London occurred December 5 - December 9, 1952. It was a 30-mile-wide air mass that was created by a temperature inversion where a layer of warm air trapped the cold air at ground level. It was a noxious smog that smelled like rotten eggs and reduced visibility to a degree where people were unable to see their feet as they walked. Death estimates from the smog range from 8,000 to 12,000. The Great Smog led to the passing of the UK's Clean Air Act in 1956.

In 1948, the U.S. Surgeon General declared that smoke and pollutants were health hazards.

After the Donora disaster, pollution gained an audience at the federal level. In 1949, President Truman established a federal committee on air pollution that was coordinated by the Secretary of the Interior. The first conference on air pollution was held in May 1950 in Washington, D.C.

The first significant legislation was the Air Pollution Control Act of 1955. The legislation provided federal funds for government research on air pollution. Many environmental jistorians consider this legislation as the precursor to the Clean Air Act (CAA) and Clean Air Act amendments (CAAa)

California - Rule 50A and the First Smoke School

California pioneered legislation and the development of smoke schools.

In 1950, CA 50A was passed. It was designed to limit pollution by requiring the use of the Ringelmann system in reading smoke. Rule 50A was important because it provided a basis that would be used by all U.S. states, and was used in 1970 to develop the New Source Performance Standards (NSPS).

In 1953, Los Angeles County began conducting smoke schools. Their smoke school program was used as a model for standardization of visible emissions observation (VEO) programs throughout the U.S.